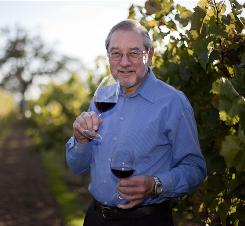 Dan Berger has been a wine columnist since 1976 and has resided in Sonoma County since 1986. Today, in addition to his privately published weekly wine commentary, Dan Berger’s Vintage Experiences, Dan writes a nationally syndicated wine column as well as articles for many publications.

He is a judge at many wine competitions, including numerous shows in Australia, as well as competitions in Slovenia, Belgium, Germany, Canada, and across the United States, judging in at least a dozen competitions each year. He also has coordinated international wine competitions for the past 35 years. Dan Berger’s International Wine Competition began in 2016 became one the nation’s largest competitions to judge ciders, with more than 240 submissions.

Dan is a speaker at wine symposiums and universities on topics such as wine marketing, trends in the industry, regional character of wines, and the healthful benefits of moderate consumption. He also speaks to assorted groups interested in learning about wine, many of them unrelated to the wine business. And he also  is an adjunct professor teaching professional wine courses at Santa Rosa Junior College.

Dan began writing about wine for The Associated Press in 1976, while he was a general assignment and sports reporter, and wrote a wine column for the Los Angeles Herald-Examiner before joining the staff of the San Diego Union in 1979. There, his wine column was syndicated nationally by Copley News Service and appeared in the San Diego Union twice a week. He also was the Restaurant Reviewer for San Diego Home/Garden Magazine for six years. He later wrote restaurant reviews for the Marin Independent Journal for four years.

Immediately prior to joining the Times, he was wine columnist as well as Business Editor for the Santa Rosa Press Democrat. From 1986 to 1988, the New York Times Syndicate carried his wine column nationally.

Among the honors presented to him are the Wines and Vines Magazine award of excellence as Wine Writer of the Year, the Father Junipero Serra award for contributions to the wine industry, presented by the California Wine Patrons of Los Angeles, the Wine Literary Award by the Wine Appreciation Guild.  He is also a member of the Hall of Fame of the New York Wine Writers’ Circle.

Additional organizations that have honored him include the UC Davis. Department of Viticulture and Enology and the Academy of Wine Communications.

His books include “Beyond the Grapes: An Inside Look at Napa Valley” and “Beyond the Grapes: An Inside Look at Sonoma County,” and he has contributed to other wine books including the University of California/Sotheby Book of California Wine and the Oxford Companion to the Wines of North America. He was also the author and project director for the Reader’s Digest’s book, North American Wine Routes.